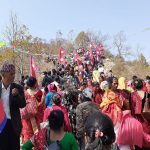 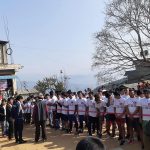 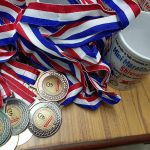 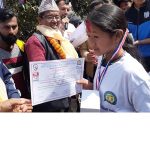 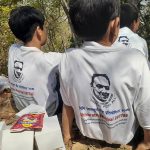 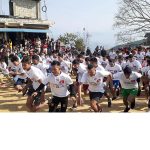 Mini marathon competition has been held in Siddhalek on the occasion of Shivaratri with the slogan “Sports in the development and promotion of religious and tourism sector”.

In the race organized by Chakradevi Community Society, The YearleyTrust, Nalang Model Academy, there were four separate events for men and women and under-15 boys and girls.

The mini marathon, from The Nalang Model Academy to the Siddhababa Temple to celebrate the Shivrati Festival has become an annual event since it was first run 12 years ago. The Yearley Trust is very pleased to have sponsored the event again this year.

All runners were given a jersey to commemorate the event together with a certificate and all winners (and 2nd and 3rd place runners) were presented with medals and a commemorative mug.

Once again, the event has proven to be a great success and enjoyed by everyone. The Trust looks forward to sponsoring it again next year.

Extract from the local newspaper:

“Shiva Silwal I of Siddhalek-1, Kumar Tamang II of Nuwakot, Prakash Shrestha III of Nilkantha-9 and Ram Ghale of Siddhalek-3 have been consoled in the men’s event.

There were 87 participants in the open men’s category and 35 participants in the open women’s category. Similarly, there are 45 students under the age of 15 and 28 students under the age of 15, said Arjun Silwal from Nalang. The award winning players from all sides were honored with trophies, certificates, medals and cash prizes.

In the program presided over by Nalang Model Academy President Jhamk B. Silwal, Siddhalek-2 Ward President Kamal B. Gurung was the chief guest.

The program was hosted by Sandeep Thapa Magar, Balram Silwal and others. Addressing the program, Ward Chairman Kamal Bahadur Gurung said that the mini marathon, which is a symbol of Siddhalek, would help in the development of the sports sector as well as play a role in the protection and promotion of religious and historical sites.

Evaluating the contribution of Chakradevi Community Society Nepal in the development of sports sector and protection of religious and tourism sector, coordinator Jhamk B. Silwal said that such programs need to be continued in the days to come. Sajan Silwal said that he would continue to conduct such programs in the coming days and a memorandum of heartfelt thanks was extended to all the supporters.

In order to protect and develop the local religious and historical area and to promote tourism. Siddhababa temple has been organized every year on Shivaratri since 2065 BS. Participants in the competition ran from Nalang Thanti Bhanjyang to Siddhababa Temple, Siddhalek wearing jerseys with the words ‘Sports in the protection, development and tourism of religious and cultural sector”