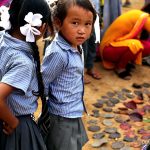 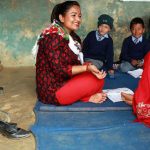 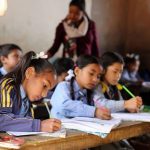 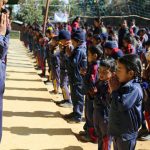 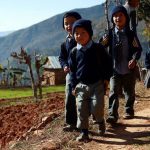 The Academy is a community run school in rural Nepal. It was set up by the local community of mainly uneducated and poor subsistence farmers in 2008 to improve the standard of education in the area (the state-run schools having a very poor reputation and are subject to political interference) and is run on English school lines. In Nepal, even though in theory education until completing year 10 is compulsory, 50% of the pupils in the state system drop out of school altogether before year 10 and in Nalang 90% of the adult population was either illiterate or very poorly educated. It is a very poor community made up mainly of subsistence farmers. This makes the local community’s desire to set up the school even more remarkable. Nalang is a small town with 1,900 households with around 11,000 people living there.

In 2014 the school started providing sporting activities and training and immediately found that even with their above average attendance rate there was a dramatic improvement in school attendance and dropout rate (in state schools attendance of only 3 days a week is quite normal).

Unfortunately, the school did not have any playing field facilities and all sporting activity took place on the small area of land which serves as an outdoor assembly area. In spite of this the school had provided 5 former pupils for the National Under 19 Football Squad and 1 for the Under 19 cricket squad. However, in late 2019 The Yearley Trust was able to purchase for the school an area of flat land between the school and the hostel and this is proving to be very popular with the pupils of the NMA. The school firmly believes that sport helps to develop teamwork and is an essential adjunct to good all-round education

In 2015 the area was hit by a major earthquake which killed nearly 10,000 people and destroyed or severely damaged 90% of all buildings (including the school). Luckily the earthquake struck when most people were outdoors working in their field otherwise the death toll would have been considerably higher. Undaunted the community immediately acted to rebuild the school with minimum disruption to pupil’s education, even before starting to rebuild their own houses.

A small fee (£40 a year for junior pupils and £80 a year for sixth form pupils) is charged to parents of pupils BUT no pupil is turned away if they cannot afford the fees. A significant proportion of the pupils are provided with free education including all pupils with special needs. The school particularly encourages equal opportunities with special emphasis on the education of girls. This is in a country where traditionally girls were not educated and were married at a very early age (and many still are).

Around 80 pupils are classified as “far pupils”. This means that they have a walk of around 1 ½ to2 hours or maybe more. to get to school across rough and hilly ground. During the monsoon season this means that due to unsafe ground conditions (flooding, landslip etc) up to 35% of pupils cannot get to school. Now The Yearley Trust has financed the purchase of land and financed the building of a 56 bed hostel for the school as somewhere for these pupils to stay during the monsoon rains. In addition the Yearley Trust has donated a building containing self-contained en suite rooms to provide quality accommodation to help attract quality teachers from the cities to come and teach at the NMA.