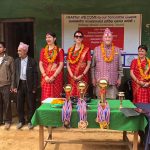 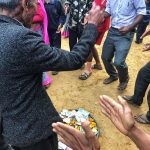 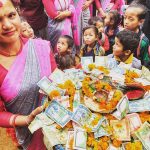 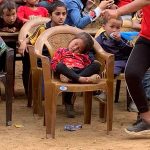 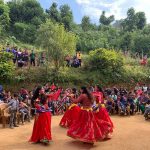 Celebrating can be exhausting!!!!!But to the members of The Yearley Trust Team the cultural dancing and singing program put on by the pupils of the Nalang Model Academy to celebrate was stimulating and exciting. Dancers of all ages showed exceptional talent and kept us all entertained and wondering at their skill.

At the end of the singing and dancing, various members of the team presented awards and certificates to pupils who had taken part in the previous two-day sporting competition between other schools organised by the NMA.
Certificates were then presented to the members of the Yearley Trust Team who were not already members of the NMA making them members. The certificates were Jointly signed by John Yearley, the Trust’s Chairman in his role as Honorary Chairman of the School Management Committee. Tee Shirts were presented by John Yearley with Doriana Dimitrova Warren giving Tika to all those members of the community of Nalang who had been involved in helping with all the work financed by the Trust over the last seven months since our last visit.
The Trust was then very proud to present to Ram Silwal, Chairman of the School Management Committee a special award and to make him an Honorary Trustee of the Trust for all that he has done to promote education in the community of Nalang and to supervise all the work that has been undertaken on behalf of the Trust.
As Tihar starts the next day the event was followed by some community dancing to raise funds for the school. Everyone joins in the dance and adds some money to the plate.
The first day of Tihar is the day of the Crow and the Trust members are looking forward to celebrating it with all their friends in Nalang.