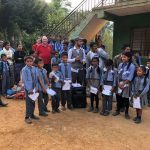 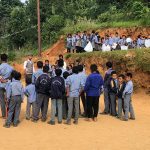 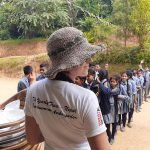 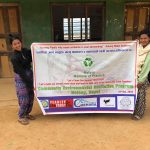 programme. 136 of the younger pupils were split into teams and were given 1 hour to collect as much litter as possible. Half the teams collected paper and the other half plastic and the two teams who collected the most litter in their category were appointed Yearley Trust Environmental Ambassadors and given a special Tee Shirt and the responsibility of encouraging everyone in the community not to drop litter or if they do to pick it up.
Meanwhile the very young pupils collected leaves of as many colours as they could to be made into a patten to help with their learning of the English words for different colours.
The three Trustees of the Trust who were in Nalang were very happy to see such enthusiasm by the pupils for cleaning up the countryside and hops that the example shown by these pupils will raise the awareness of the need not to drop litter and to encourage others to do the same.
The enthusiasm with which the pupils went about the project was outstanding and the Trust’s Chairman, John Yearley, told all of them that they were really all winners because of their outstanding efforts.