The Haileybury Society supports the trust’s work in Nepal

The Haileybury Society supports the trust’s work in Nepal 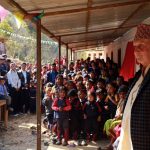 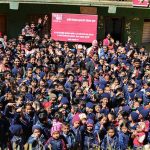 The Society represents former pupils of the school and Haileybury is the school where John Yearley, our Chairman, was educated. The Society will, among other things, pay the fares etc for four Upper Sixth form pupils (17/18 years old) a year to come out to Nalang as volunteers to work for the Trust. The pupils will be chosen by the Society and the Trust as the ones that have the best skills to assists communities in rural Nepal. In addition, they will regularly update their members on what is going on in Nalang and in other rural areas in Nepal and John Yearley has been invited to speak at the Society’s Annual General Meeting at the end of November.
The Haileybury Society has many very important and influential members around the world who can help to spread the message. For those with contacts with the Gurkha community, Field Marshal Sir John Chappell, who became head of the British armed forces and was the most senior ever Gurkha officer, was educated at Haileybury and is a member of the Society.
The Yearley Trust and The Haileybury Society are at the moment working out how the Society can best help our work in Nepal to support better education and health for people in rural communities.